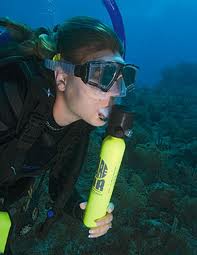 Diving Tips: Saving Air
Do you breathe your tank down faster than your buddy? Here are 7 diving tips to help conserve your oxygen and extend your bottom time.


Even a tiny stream of bubbles from an O-ring or an inflator swivel adds up over 40 minutes, and may be a sign of more serious trouble ahead anyway. A mask that doesn't seal is another kind of leak in that you have to constantly blow air into it to clear out the water. It's also a source of stress, which needlessly elevates your breathing rate and thereby reduces your breathing efficiency. Does your octo free-flow easily? That can dump a lot of air quickly. Detune it or mount it carefully so the mouthpiece points downward.


Inexperienced divers are famous for burning through their air supply at a furious rate, so one of the best diving tips for saving air is to simply dive more often. You may not be a new diver, but unless you dive almost every week it's still an unnatural activity. By diving more, your body will get used to the idea, and you'll breathe less.


The energy cost of speed is even more than you might think:  Swim half as fast as you do now, and you'll use less air.


Because your regulator has to deliver air at the same pressure as the water, a lungful at 33 feet (two atmospheres) takes twice as much out of your tank as does the same breath at the surface. At 99 feet (four atmospheres) it takes twice as much as at 33 feet. There's absolutely nothing you can do about that except to avoid being deeper than you have to be. If you're making a transit over an uninteresting sand flat to get to the edge of the drop-off, do it at 15 feet instead of at 40 feet, and you'll save air.


If you're overweighted, you have to put more air into your BC to float it and be neutral. The inflated BC is larger and requires more energy and oxygen to push it through the water. An extra eight pounds of lead means your BC is one gallon bigger when inflated enough to make you neutral.

Save energy and air by reducing drag. It's no coincidence that fish, whales and seals have smooth bodies with very few appendages. Divers, by contrast, start out with long, lanky appendages, then load themselves down with lots of bulky gear. Masks, BCs, tanks and the rest of it present rough, complicated shapes that cause lots of turbulence and drag.
Fine-tune the amount of lead you carry and where you carry it. Your goal is neutral buoyancy with minimum BC inflation and a perfectly horizontal position.

If you are negative, for example, you will have to fin yourself upward a little, as well as forward, to maintain a constant depth. You'll look like a "tail-dragger" airplane taxiing on the runway: Your feet and legs will be lower than your shoulders, enlarging the "hole" in the water and causing drag. If you are positively buoyant, you'll have to fin downward, with the same result.

Carrying the minimum amount of weight is important because if you are heavy (the usual case), you'll have to inflate your BC to compensate for the extra lead. The inflated BC is physically bigger and enlarges the "hole" you make in the water.

Deep breaths, on the other hand, dilute the dead air with fresh air and deliver more oxygen to the lungs. That not only promotes quicker gas exchange, it also delays the urge to take another breath. A tank lasts longer when you take deeper breaths because you need fewer of them.

Breathe slowly too. That increases your uptake of oxygen and your discharge of carbon dioxide simply because each breath stays in your lungs longer. It gives more time for gas molecules to pass between the air sacs in your lungs and your bloodstream.
Posted by tornado194 at 02:51 No comments: