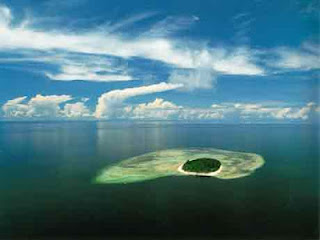 Sipadan is the only oceanic island in Malaysia, rising 600 metres (2,000 ft) from the seabed. It is located in the Celebes Sea off the east coast of Sabah, East Malaysia (which is on the island of Borneo). It was formed by living corals growing on top of an extinct volcanic cone that took thousands of years to develop. Sipadan is located at the heart of the Indo-Pacific basin, the centre of one of the richest marine habitats in the world. More than 3,000 species of fish and hundreds of coral species have been classified in this ecosystem. Sipadan has been rated by many dive journals as one of the top destinations for diving in the world.

Frequently seen in the waters around Sipadan: green and hawksbill turtles(which mate and nest there), enormous schools of barracuda in tornado-like formations as well as large schools of big-eye trevally, and bumphead parrotfish. Pelagic species such as manta rays, eagle rays, scalloped hammerhead sharks and whale sharks also visit Sipadan.
A turtle tomb lies underneath the column of the island, formed by an underwater limestone cave with a labyrinth of tunnels and chambers that contain many skeletal remains of turtles that become lost and drown before finding the surface


I'm just came back from sipadan last week. Below my underwater photo from Sipadan that been capture with Canon G 12 + single strobe YS01.This is my first time i using the strobe. So I stiil learning how to use the strobe correctly and to avoid back scatter.Enjoy it